I personally believe in the huge benefits of negative ions because within 1 month of exposing my mum constantly to 100,000-500,000 negative ions per cc/air everyday, I saw her cancer markers drop from 22 to 16.5! That was before we made changes to her diet and lifestyle so wearing the negative ions exposure was the only variable.

*Please visit another expert site www.negativeionclothes.com if you wish to find out more details.

Why are negative ions good for us? From the expert…

Dr. Horiguchi explains it very well in this video:

As you can see from the video,

It is common knowledge that free radicals cause DNA damage. Hence, there are so many advertisements going around consuming foods and supplements with high antioxidant content. But what exactly is a free radical?

Free Radical definition: an especially reactive atom or group of atoms that has one or more unpaired electrons; especially those that are produced in the body by natural biological processes or introduced from an outside source (as tobacco smoke, toxins, or pollutants) and that can damage cells, proteins, and DNA by altering their chemical structure Even if we eat and live very healthily, there are many external sources of free radicals that we are unknowingly exposed to. Source: http://justbeautify.com/ 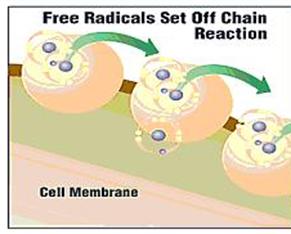 The problem with free radicals is that they set off a chain reaction. A free radical cell lacking an electron steals an electron from its neighboring cell, which makes the second cell unstable. Source: Unknown.

Free radicals lack an electron because of the oxidation process, but having constant exposure to negative ions (also known as electron/anion) supplies a free radical with electron(s). A free radical requires negative ion(s) to become stable.

How many Negative Ions do we need and how much do we actually get? We need 100,000-500,000 negative ions per cc for optimal health, and to enhance our own body’s natural healing abilities to aid recovery from chronic illnesses We are getting 500 negative ions per cc on average in an open window home in the city. This is not even in the levels “healthful to human health”. This is why we need to supplement our surroundings with negative ions. Source: Reltec.com

*Please visit www.negativeionclothes.com if you wish to find out more details.

Negative Ion clothes are made of a fibre called Teviron and Neoron (upgraded version) and generates high level of negative ion clothing. This material is not new as it was invented in the 1950s and I am surprised so many of us have not heard of it! Because of this breakthrough technology, Teviron has won 3 big prizes: You can read about the 4 key wellness benefits of negative ions on another expert site here.

Why do I believe that it works? Seeing is believing

One of the most common concerns I hear from my family and friends before purchasing negative ion products is – How do I know that the material actually generates negative ions?

Using the same meter, when I put against a normal cotton fiber on my bed, it registers a +0.05kV charge (~500 positive ions per cc of air). So amazing that just by changing the material we wear and sleep on, we can surround ourselves with negative ions! There is another independent demo on negative ions you can watch.

Provided that a cancer patient is exposed to a sufficient quantity of negative ions, there are 2 main ways that research has shown that negative ions can help boost immunity:

Before I bought the negative ion clothes for my mum, I read many online reviews on Teviron. Some claim it is a miracle product, some claim it is a scam. After doing my research, my conclusion is that if we follow the guideline from the Asian Medical Journal (above, now known as Japanese Medical Association Journal), one requires 100,000-500,000 negative ions/cc of air to enhance the body’s natural ability to help chronic illnesses. And this means that our immunity cannot be raised to help against serious chronic illnesses with just 1 scarf or 1 pair of socks, which generates only about 10,000 negative ions/cc of air per item. (If you want to know how much is enough to make up 100,000-500,000 negative ions, you can write to me).

*Please visit www.negativeionclothes.com if you wish to find out more details.

There are a number of research papers documenting the benefits of negative ions. This video documents some of them, and I also list some of them below.

Even if you feel that you are perfectly healthy, it is always good to have negative ions to neutralize oxidation from all the free radicals and electro-pollution in our surroundings.

I did a lot of research on negative ions before making the purchase for my mum so feel free to drop me an email at beatrice@eatprayflying.com if you want more research findings as I didn’t want to spam this post and make it so difficult to read.

I am starting a series on how negative ions can help improve specific health conditions. Stay tuned for more!

The other complementary treatments my mum went through to recover from cancer:

Specific disclaimer for this post: Negative Ion Clothing is NOT a medical device, a cure, a therapeutic tool, or medication. Nefful products are not intended to diagnose, treat, cure or prevent any disease and no warranty or representation is made in this post with regards to its ability to do so. This post is based on my own experience and personal research. You are advised to seek professional medical advice for your own specific health issues.